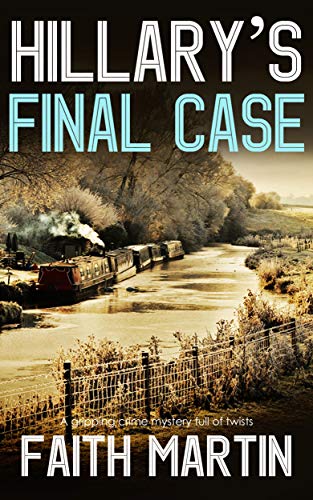 ONE OF THE WORLD’S FAVOURITE DETECTIVES BOWS OUT IN THE FINAL BOOK OF THIS MILLION-SELLING SERIES.

DETECTIVE HILLARY GREENE IS SOLVING THE COLD CASES NO ONE ELSE COULD CRACK.

PLEASE NOTE THIS IS A REVISED EDITION OF A BOOK FIRST PUBLISHED AS “A NARROW TRAJECTORY.”

Can Hillary finally close the case of the missing young women?

Can she take down one of Oxfordshire’s most wanted criminals?

Can she handle her new boss?

Can she help one of her team get answers on his long lost sister?

And will she really get married and leave her beloved boat?

FIND OUT THE ANSWERS IN THE FINAL HILLARY GREENE BOOK

Hillary Greene has returned to Thames Valley Police HQ, acting as a cold-case consultant for the Crime Review Team, looking into murders which the police have never been able to solve.

This is a crime mystery full of well-observed characters, which will have you gripped from start to the absolutely thrilling conclusion.

What readers are saying about HILLARY’S FINAL CASE
“A fairytale ending to a fantastic series.” Greta

“Another well-written book which is as good as the very first one.” Barbara

“What a great finish to a wonderful series.” Claudia

“It's a brilliant read.” Annette

THE DETECTIVE
DI Hillary Greene
An attractive, single woman just over fifty, Hillary Greene was a police officer of many years’ experience (earning the rank of DI) and came up through the ranks. Consequently, she knew how the system worked, and was always fiercely loyal to the force without being blinkered to its faults. Forced to retire early through no fault of her own, she has now returned to the force as a civilian consultant on cold cases.

PLEASE NOTE THIS IS A REVISED EDITION OF A BOOK FIRST PUBLISHED AS “A NARROW TRAJECTORY.”